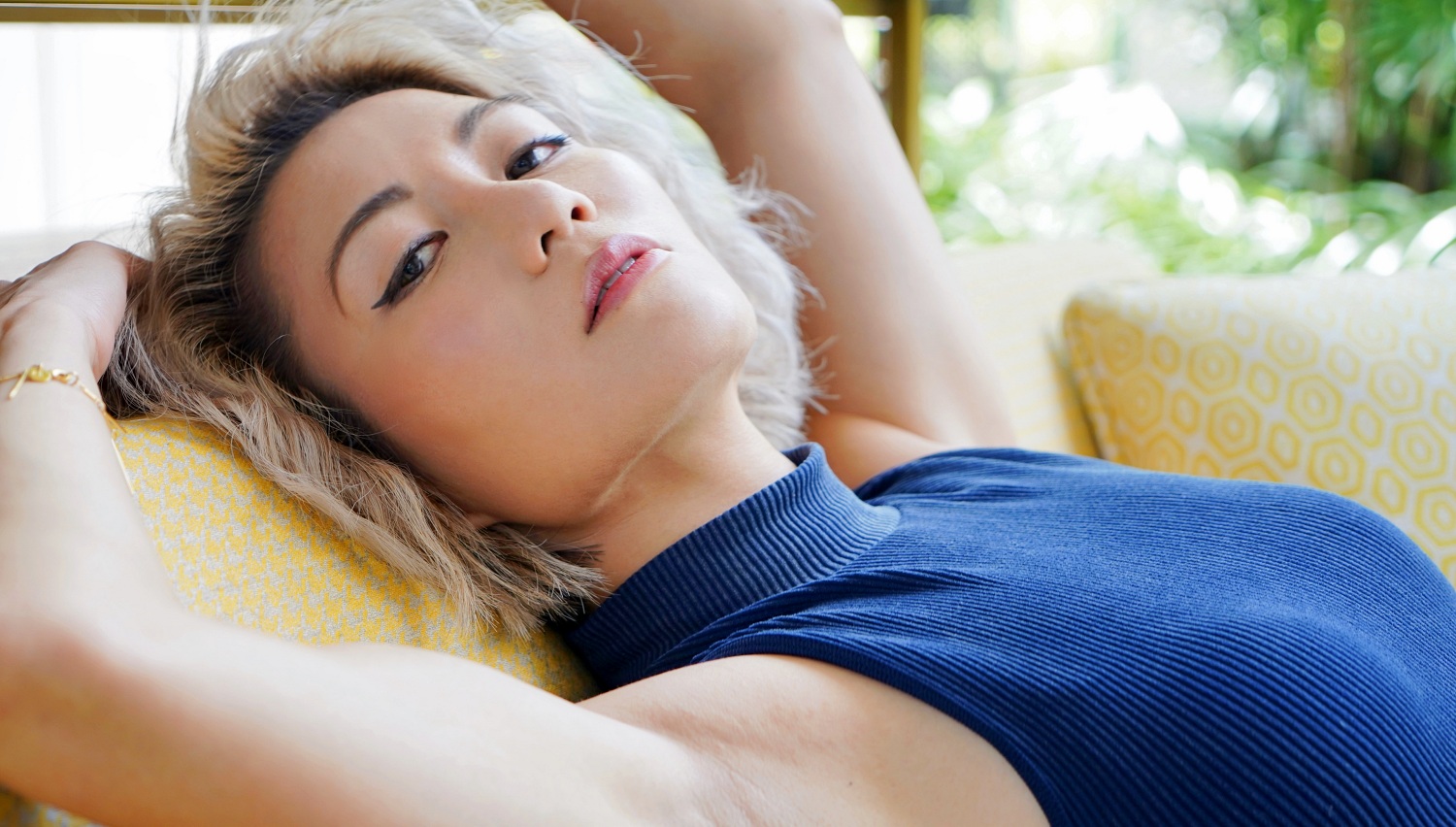 No one said showbiz was easy, and if you’ve met JuJu Chan Szeto, you’ll know she’s not one to give up. We sit down with the action star to talk about how embracing her martial-arts background led to her big break in Hollywood.

As a child, JuJu Chan Szeto wouldn’t sit still. Her father was an action-movie fanatic, and every time they watched something together, Chan Szeto remembers copying every move by Bruce Lee, Jackie Chan and Donnie Yen. “I’d jump from table to table,” she says. “I broke a lot of things at home.” Exasperated with their daughter’s boundless energy, her parents sent her off to judo school where she fell in love with martial arts. From judo, to karate, Chinese kung fu, taekwondo and Thai boxing, Chan Szeto has honed her martial-arts skills since she was 10, entering national competitions and representing Hong Kong in taekwondo.

A born performer, Chan Szeto says she’s never turned down a chance to sing, dance, or act since she was a child. She studied computer science – “something practical befitting a traditional Chinese family” – but ultimately found herself enrolling into New York’s Tisch School of the Arts and learning the ropes of the film industry. Afterwards, she came back to Hong Kong to begin her career here and she’s never looked back since.

It wasn’t an easy start, though. From beauty pageants to reality shows, and even a brief music career, Chan Szeto tried everything to make her mark, but it wasn’t until a director told her to embrace her roots as a martial artist that she found her way. That director, with the gems of wisdom that put Chan Szeto on the map and Hollywood on her radar, is Antony Szeto, who’s now her husband.

I talked to Chan Szeto about her love for martial arts, her favourite action scenes and her upcoming feature film on Netflix, .

You’ve credited your husband for pushing you to embrace your martial-arts background as an actress.

Yes. In Hong Kong especially, actors are expected to act, sing, and appear in campaigns. When I came back I took any opportunity that came to me, because I just wanted to perform. I got signed to a music label and I released an album in Hong Kong where I wrote my own songs. My husband, Antony Szeto, directed one of my first music videos. At that time, I was doing so much and Antony knew I wanted to become an actress. But at that time also, I didn’t tell people that I could do martial arts. My image was very different then – I had long hair and looked very girly, which was the typical look in Hong Kong at that time. I wanted to make hip-hop and rap music, but my management told me to stick with mellow love songs. But Antony told me he was having a hard time finding female actors who could act and do their own actions. There are a lot more action stars in the older generation, but not in our current generation. He could tell I could fight, and he said maybe I should focus on letting people know that and not be afraid of being different. After that, I brought my nunchucks out and showed people what I was capable of.

Was that how you got your Hollywood start and joined the cast of Crouching Tiger, Hidden Dragon: Sword of Destiny (2016)?

Netflix was doing this worldwide search for Asian actors and actresses who knew martial arts for the movie, and they’d heard about me as one of the action actresses based in Hong Kong who also spoke English. There really weren’t that many of us at that time. There’s Michelle Yeoh, whom I really like, especially after working with her. She didn’t start in martial arts, she was a dancer who actually got trained by the Jackie Chan team and became a female action figure. I’d say until this day that she’s the biggest female action actress in Hollywood and it was amazing to have worked with her on Sword of Destiny. She was so graceful, really loving and caring and generous. I look up to her and, yeah, I hope I can work with her again.

Do you do a lot of your own stunts?

No matter how good you are, everyone in Hollywood has a stunt double for insurance. But I do all my fight actions myself. I have my own fighting style and the way I do my actions makes it hard for people to double me. But there are times when we shoot multiple units because of our tight schedule and the production might have to use doubles to pick up some shots of our previous fights, because we can’t be in two locations at once. I love to run through all my actions as many times as possible before I shoot them. And I also like to attend the pre-visualisation sessions with the stunt team, which is where we visualise the scene to show the director how it’s going to look on
the screen.

Have you choreographed your own stunts too?

On Wu Assassins, we had a longer period of shooting because it’s a TV series, so I became really close to the stunts team and the action choreographer Dan Rizzuto. He knew I did a lot of high kicks, so we incorporated a lot of those into the kitchen scene. We came up with the choreography together in the stunt room and ran the whole scene with the other stunt doubles. The choreographer was like, “I’ve never had an actress do this – usually it’s the stunt double’s job.” But I like being there and being able to have some creative input. I also choreographed all of my fight scenes in an independent action film called Hollow Point, which aired on FOX Movies in Hong Kong and my action performance in that film got me a nomination for a Jackie Chan Action Film Awards in 2019 for Best Action Actress.

Out of all the projects you’ve done so far, which would you say is your favourite fight scene?

The kitchen fight in Wu Assassins episode three is one I love a lot. It’s so quick and dynamic and we were making use of all the kitchen pans and stuff. I love including things from the environment in the fight. Another favourite one would be in Jiu Jitsu (2020) with Nicholas Cage. That was one long shot of me fighting five or six guys alone, using nunchucks, jumping and turning. When we shot it, it was a two-minute-long fight scene, but in the final edit, there’s other scenes added in because there were a few fights happening at the same time. The camera guys are also moving with us at the same time to capture the shots – we’re not really hitting the actors, so you have to catch it at a certain angle, right? It’s a whole teamwork thing.

Do you have plans to direct your own film one day?

I did a short action-comedy in Los Angeles before Covid. I shot it already I just need to finish editing it so I can release it. I’m interested in directing action films, especially as an Asian. I don’t think there’s another female action film director who actually has an action background, and I’d like to be the first. Hopefully I could get the editing done by the end of the year so I can put it in a festival and release it next year. It’s a really fun piece.

Do you feel that as an Asian American actor today, you’re finally receiving the recognition and getting more opportunities?

I started auditioning while in NYU, but at that time there weren’t that many Asian-American roles in America. It’s only these past five years or so that more roles have come up. I receive auditions every week from Hollywood now. There are a lot of roles and more people competing for those roles as well. It’s a good thing. For Asian representation in Hollywood to grow, we need more Asian faces, more roles in different genres. It’s a healthy competition.

What’s a role you’d like to play that you haven’t tried yet?

A musical! Singing, dancing and maybe some action. I want to be in a musical so badly. I recently re-watched Glee and there were so many great songs and dance, and it looked like it would have been so much fun to be one of the main cast.

So Wu Assassins: Fistful of Vengeance comes out on next year. What can we expect from it?

Four of the original cast members come back from the TV series. I still play Zan, and then Lewis Tan, Iko Uwais and Lawrence Kao also come back to reprise their roles. There are new cast members too, including Jason Tobin from Hong Kong, who’s great fun to work with. Roel Reiné is the director and he was super great to work with too. We filmed the entire movie in Bangkok in 28 days because of Covid – I think they wanted to shoot it in the shortest amount of time possible since the longer you stayed the more liability there was for the whole production in case the whole thing had to shut down. We managed so many fight scenes it’s quite amazing. The audience can expect heavy action, fast pacing and just pure fun seeing all of us going around Bangkok.

Managing Editor
A print and multimedia journalist, Stephanie has written for several of Hong Kong's most prominent luxury lifestyle publications on topics spanning watches and jewellery, travel, beauty, and fashion. She lives an active lifestyle, is always curious about the next health trend, but will never turn down a drink, or two, or three.
watches Jewellery travel beauty Fashion